Android is ruling more than half of the smartphone industry and there are a lot of reasons why one should be using an android emulator.

A lot of developers wish to run their developed apps on virtual devices than the actual device to avoid complications. If a developed app is using system services such as calls, network settings, and other crucial services then it may end up in breaking up the device.

This happens in certain situations where the app is mistakenly built wrong. To avoid this, developers can simply install an AVD[Android virtual device] on their computer and run their apps virtually.

The android emulators are also helpful for testing your developed apps on different devices and aspect ratios. You can test on multiple android devices with the help of emulators virtually and without having to pay anything. 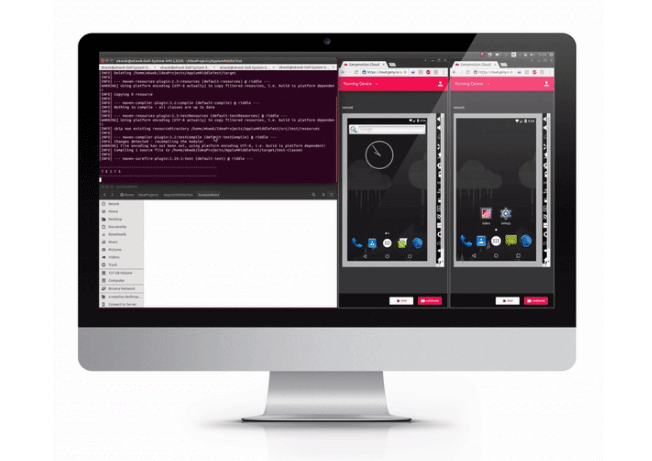 In the first place, the best part about genymotion is the features and compatibility it holds for your convenience. Genymotion allows you to have a battery test based application running. It helps you to react with various battery levels changing and test it easily.

You would not like to have network interruption on any device using your apps. Genymotion allows you to have a network test while developing your android application and that’s the reason it is one of the best android emulators. The network test includes 4G, 3G, Subway and Edge.

Check out: Data Breach – Free Tools To Protect Your Data on Web

With Genymotion you can also check Disk IO throttling and emulate devices with slow internal storage. You can also have SMS and call interruptions using genymotion and record their effect. Along with accelerometer and multi-touch, genymotion the perfect android emulator has pixel perfect display. It displays the exact screen on the window.

Genymotion is compatible with Android SDK tools and android studio. It also allows testing your website in various Android browsers. 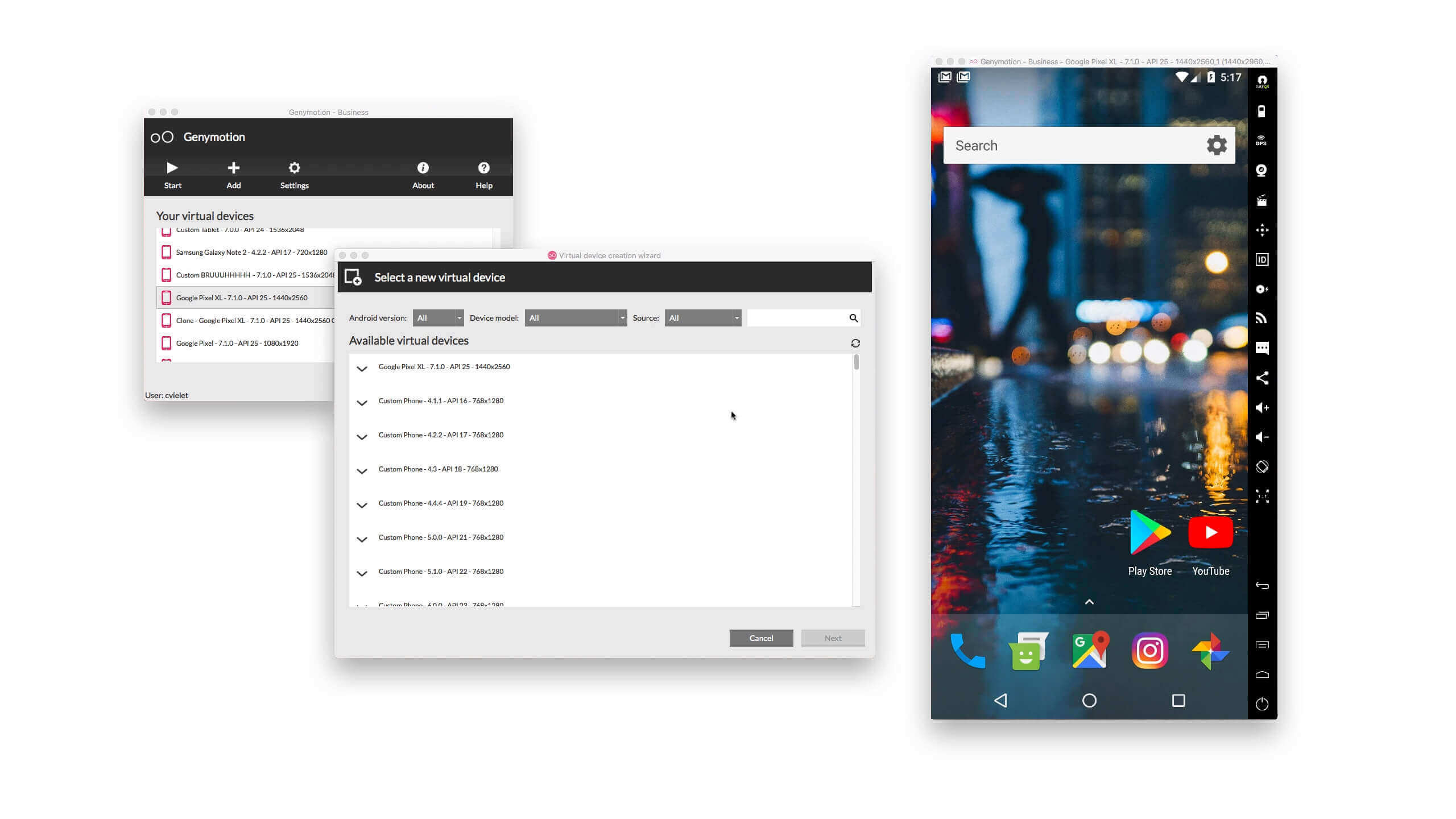 Android ID and IMEI can be changed on the go without having to reboot your device. This enhances the track testing and also categorizes your device. The device ID and IMEI is displayed with this tool and is handy in use. With premium features, genymotion is a must-have android emulator.

Also read: 9 Best App Lock Apps For Your Android Device You Must Use [2020]

With Open GApps feature you can test and run your developed android applications with a single click. If you are using an app based on google play services then this eases your testing capabilities. It also allows you to clone and reset your android device. By all means with this feature, you can clone your device multiple times for iterations and other integrations. additionally, you can also factory reset your device and reset it to the same as it was loaded. 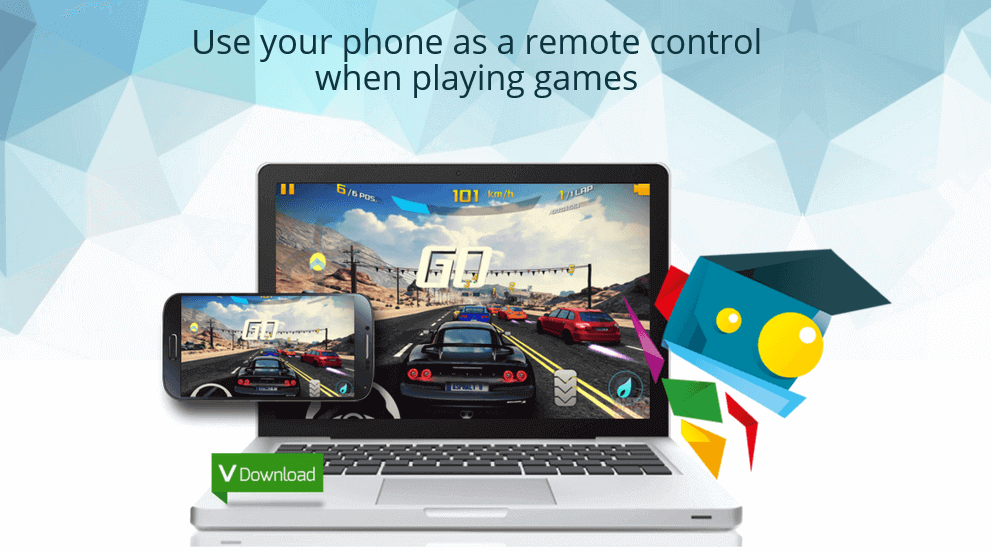 Andy Os is a powerful android emulator and provides a better hand on GUI based applications. The most interesting feature about the andy os is the way it is built to play games and emulate the whole android operating system. It is quite handy when it is about playing games on your emulator compared to other android emulators.

Not only games but andy os is also good when it comes to fulfilling the requirements of the emulator. It is overall a good android emulator. If you are playing games such as cars and strategy games on your andy os then you can also use your android device as a remote controller. It is one of the features missing in other android emulators as far I know.

You can also run and use your social media apps like Snapchat, WhatsApp, Instagram and much more for the same. AndyOs is pretty much like a smartphone on your computer. 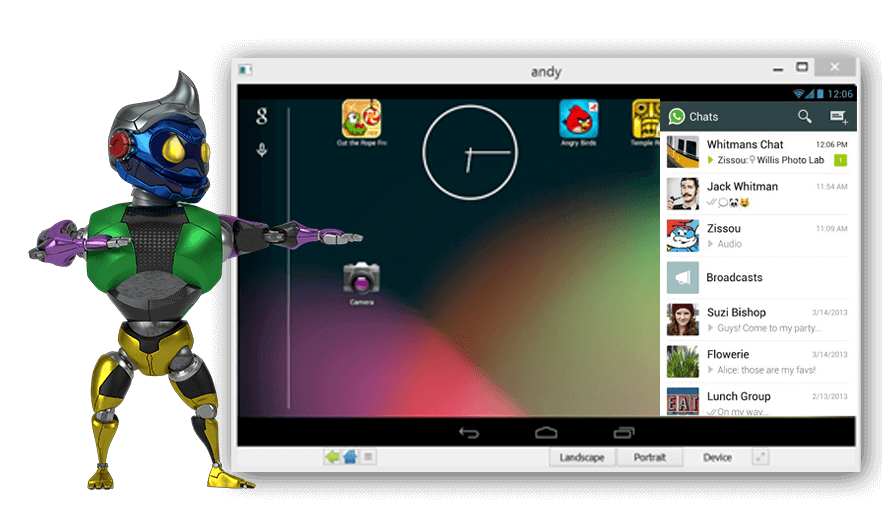 If you want to use android just like any other smartphone and not develop apps on emulator then you can download AndyOs. It provides a seamless transition of apps and also gets rid of storage restrictions as you store directly on your pc. No doubt it is one of the benchmarks for android emulators on pc.

It let you explore all the parts of an android device in virtualization experience and is visually appealing too. It is one of the best android emulators which you can download without any second thoughts.

Anbox – Android in a box 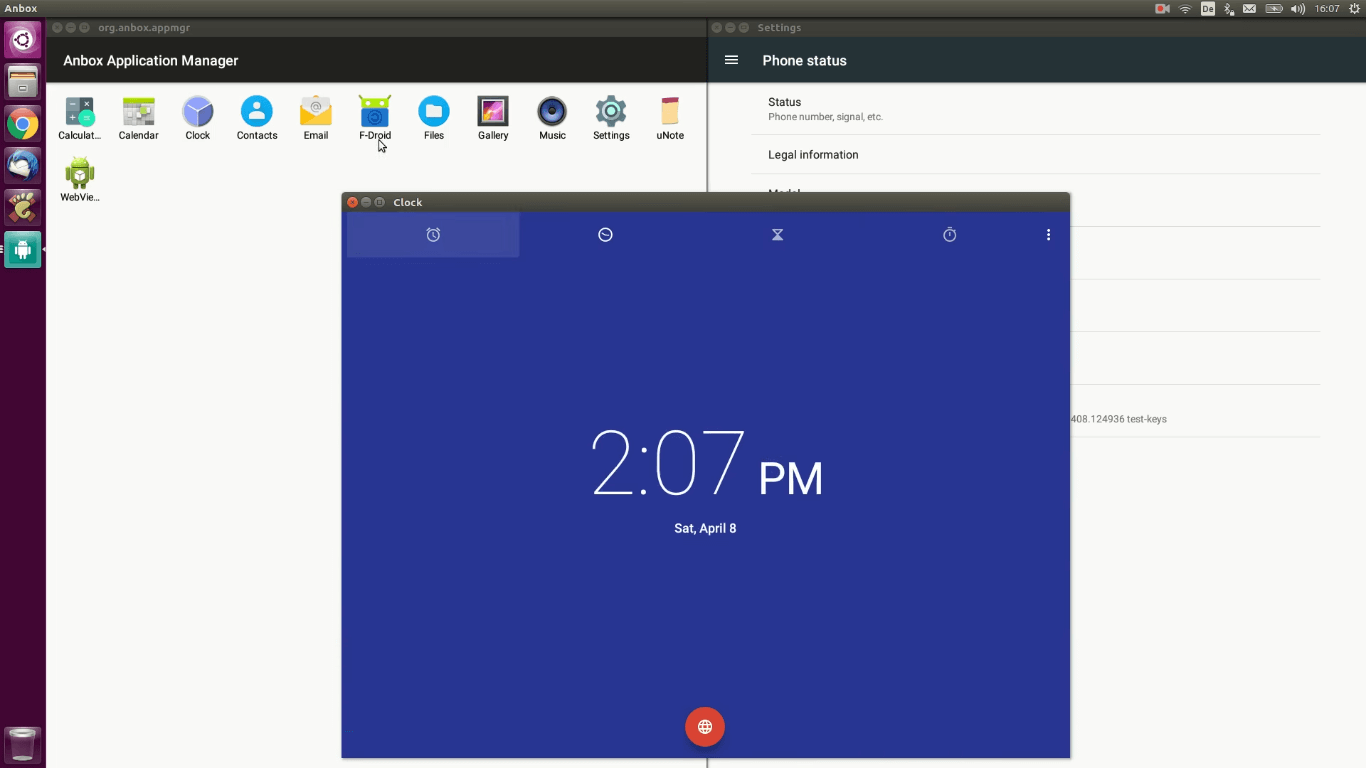 Anbox is one of the most pioneer android emulators present for android app development in Linux. It stores the whole operating system inside a container, abstracts the hardware and also integrates core services. Every android application on the device will be integrated as a native application.

Anbox is an open-source android emulator and is licensed under apache and GPLv3. It runs as a whole operating system on the emulator which is quite flexible to run any application on it. Developers who love playing with software can easily customize it according to their needs.

Since Anbox is at operating system virtualization, it does not have direct access to any of the hardware resources. You can put it in this way, it installs all your applications in a sealed box disallowing any access to your hardware or data.

When it comes to performance it is seamless and does a lot like a bridge between hardware acceleration features. Considerably when compared to other android emulators on pc, anbox is an emulator with a focus on saving your data and hardware resources.

Anbox tightly integrates with the host operating system and provides all the flexibility for virtualization. This android emulator manages a good line of hardware to let you even play the most resource-intensive games without compromising hardware.

It has great versatility for emulation; it supports all the versions from cupcakes to the latest android version in the market. 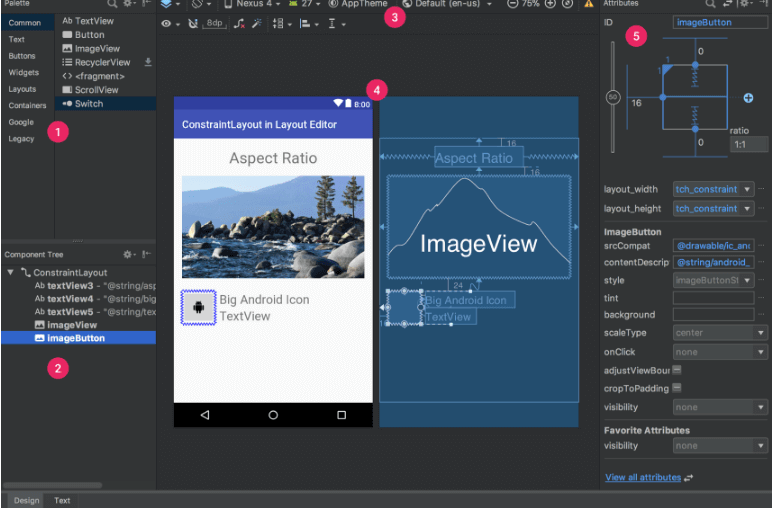 Android SDK is an official emulator by android which allows you to monitor a virtual android device on your screen. It lets you test your developed android apps without any hazel and is convenient.

The Android SDK provides insights for apk composition with an apk analyzer. This helps to reduce the time spent on debugging issues along with dex support inside your app itself. The apk analyzer also reduces the size of the developed app being exported. An apk analyzer is a powerful tool that compares two apk’s side by side and also has a quick view of final versions such as android manifest.

This android emulator is faster compared to other emulators and allows you to test your apps conveniently. It is almost similar to a real device with testing capabilities for stimulating calls, text messages, sensors, and network applications and location-based operations. It is fast and allows you to use a pre-defined configuration for different android versions.

Furthermore, the intelligent code editor is a perk for android developers. It lets you edit your code and develop it intelligently. The toolbar lets you perform actions like launching the app and running android tools. Also, there are many more handy tools in the editor which will help you through the development.

Android profilers help with real-time updates of what CPU memory and other resources your app is utilizing.

With Bluestacks, you can connect external hardware such as keyboard and mouse while you are playing your mobile game on PC with an android emulator.

Also, with bluestacks you can play multiple games without compromising your CPU performance. This is a great way to play games and also sync them on different screens. This is something that most of the android emulators don’t provide.

Bluestacks android emulator can help you with local language translation of any game and also automate tasks for you. Suppose you are changing your weapon during the game then you can automate a single button to change your weapon repeatedly even if it is not programmed originally in the game.

Enable high fps and also record your game with a single click and lock your cursor automatically during the game while shooting. This is some kind of hack with smartphone gaming.

Bluestacks also offers multiple other utilities such as disk cleanup and multiple android profiles. You can record and also screenshot your gaming experience right from the bluestacks android emulator. 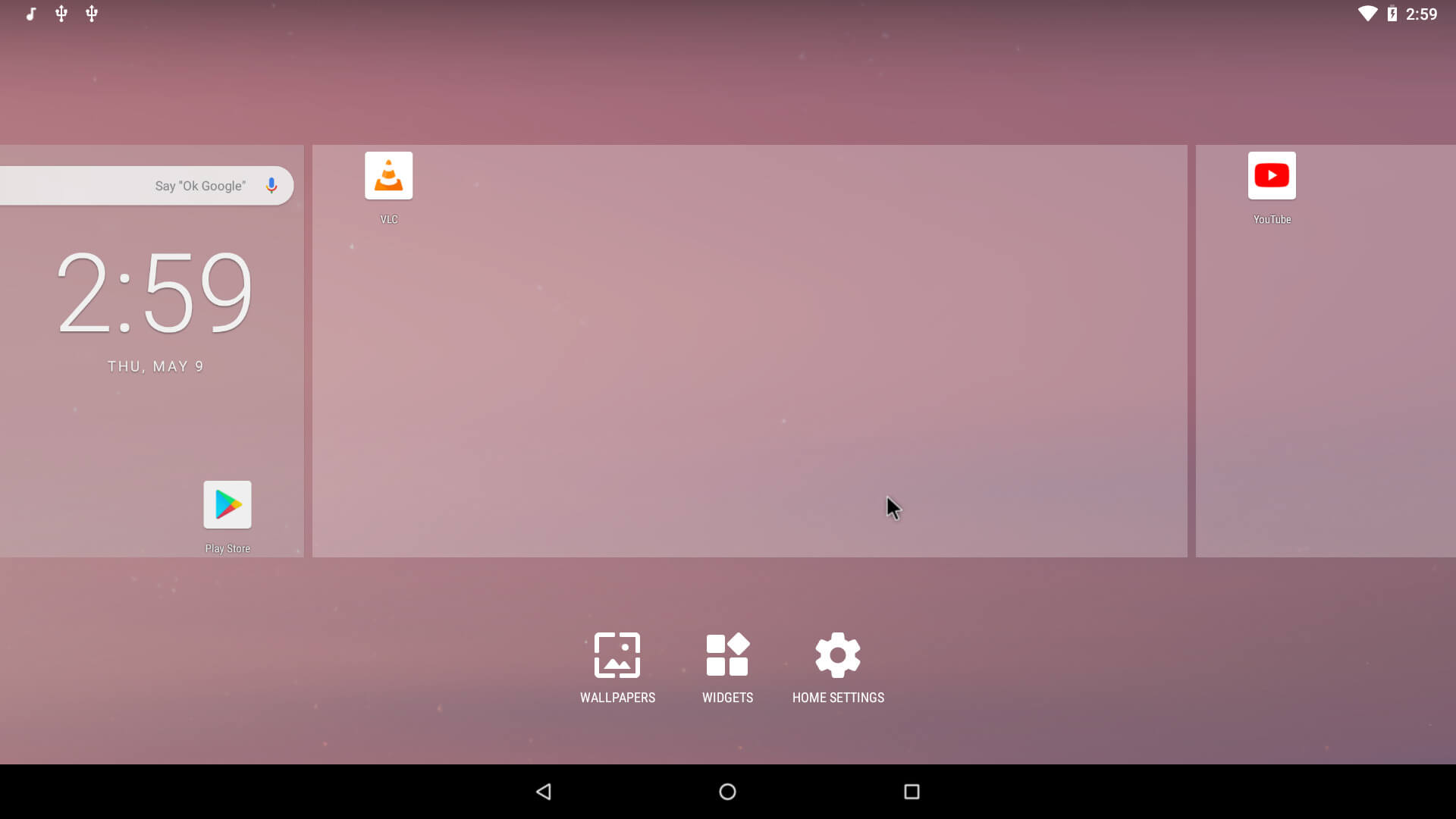 Android x86 is one of the best android emulators to use if you are facing problems with genymotion. It is open-source software available in iso format and is easy to install. You can easily access to their source code and manipulate the emulator as per the needs. The idea behind android x86 is to bring the Android operating system on Linux operating systems and developers test the apps and perform operations on them. To install an android x86 emulator on your computer, install a virtual box and select the downloaded android x86 iso file.

The installation is pretty simple and directly interacts with the hardware on your system. It is virtualized on your system with the help of a virtual box which lets you create your live android distribution.

Android x86 supports inbuilt wifi connection and it doesn’t require any network configurations to run your applications unless you want it.

The iso files can be easily downloaded from the website and these android versions can also be downgraded using the iso files. It is pretty much one of the alternatives for genymotion and can be used if you suffer from genymotion in the first place.

Archon is a unique android emulator, it does not depend on virtualization like other android emulators for pc. You can directly run your apps and play games on chrome with the help Archon android emulator. It is pretty simple to install and use it, just install Archon runtime on your browser and visit chrome apps to start using it.

It is one of the handy android emulators with games and is much more powerful with the help of a chrome browser. The android apps can be deployed and run on Archon by using chrome and it does not need any other virtual box to run the environment. Everything is done on chrome.

Which emulator is best for Android?

What is an Android emulator?

The android emulators are also helpful for testing your developed apps on different devices and aspect ratios. You can test on multiple android devices with the help of emulators virtually and without having to pay anything.

What is the safest Android emulator?

« How to install virtualbox in ubuntu?